A History of Terrace Tensions

The return of South Melbourne and Melbourne Knights to the VPL (former VSL) was a boon for the local competition. Great crowds for second tier football abounded between 2005-2008. Newly promoted Richmond, with it's proximity to Victory's first home ground Olympic Park and it's Friday night fixtures appealed to some Victory fans looking to sample VPL action in their off-season, and they formed a support group called the Heyington Bridge Crew (HBC), named after the railway bridge that runs behind the goal at the Western End of Kevin Bartlett Reserve.

The 2007 VPL season would be the origin of poor crowd behaviour by Victory fans which culminated in the events at Lakeside Stadium in the NPL game between South Melbourne and Melbourne Victory on Sunday, as covered in detail by South of the Border.

On March 9, 2007, Richmond hosted South Melbourne at Kevin Bartlett Reserve. It was an eventful game on and off the park. The ranks of the HBC had swelled from the regular 20 or 30 to over 200 people behind the Bridge End goal for the high profile fixture. South's Clarendon Corner support took to the slight hill in the South Eastern corner of the ground.

Nathan Caldwell had given South an early lead, but an own goal saw the sides level at the break. When Caldwell put the Blues ahead again in the 66th minute, some fans jumped the fence and onto the pitch to celebrate.

Things had been worse at the other end for a lot of the second half. Dean Anastasiadis was bombarded with obscenities, including one person keen to shout out his intent of acts of paedophilia with his daughter. At one point the contents of a plastic drink cup was thrown over him as he went to get the ball from against the fence for a goal-kick. When Marco Kueck equalised for Richmond following a corner in the 71st minute, one fan jumped the fence and followed Anastasiadis as he moved from one goalpost to the other, getting in his face the whole way to abuse him.

Fernando de Moraes scored a winner for South just two minutes later. Anastasiadis would allege after the game that he had been struck by a coin thrown from the crowd. Both clubs received substantial fines as a result of the actions of their supporters.

Later in the month, on March 30, Richmond hosted Whittlesea Zebras in front of a vastly smaller crowd. The Zebras also had a group of Victory supporters following them, the FDZ (Fossa Dei Zebrati), and some of these fans were denied entry when caught with flares by security at the entrance gate. They gathered on the second pitch at the Eastern End to watch the game through the uncovered fence there, and upon kick-off delayed the game by throwing a flare over the fence which landed inside the six yard box.

That year saw widening of the Monash Freeway taking place, with the current car park at the Heyington Bridge End yet to be constructed. There was construction vehicle access to the Freeway via a path behind the goal at that end, with temporary fencing erected a little closer to the pitch than where the current fence sits. At half-time, the FDZ changed ends. During the game they would go on to throw flares into the middle of the HBC from the fence behind them.

When Richmond hosted Melbourne Knights in May another bumper crowd was in attendance. Once again the HBC was joined by additional Victory fans looking to face the fans of a former NSL club. This time things did not get as out of hand at the game as the South Melbourne fixture. There were, however, rumours of a confrontation at a nearby train station after the game, in which cutlery from the Richmond clubrooms was brandished.

All of this lead to a heated friendly between South Melbourne and Melbourne Victory at Bob Jane Stadium in June 2007. South, Knights and Victory fans, and probably some from other clubs for good measure, were involved in several skirmishes. Most appallingly, South Melbourne player Andy Bourakis was struck in the head by a flare thrown by Victory supporters. No punishments followed, with the only course of action taken being the suspension of any further games between South Melbourne and Melbourne Victory. Little surprise then, that when they should finally meet again there would be issues.

When Richmond visited Epping Stadium in late July to play Whittlesea Zebras they were greeted with the following banner displayed by the FDZ: 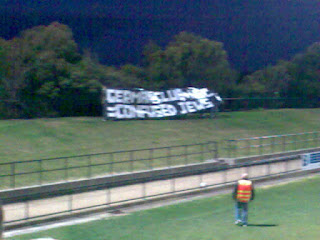 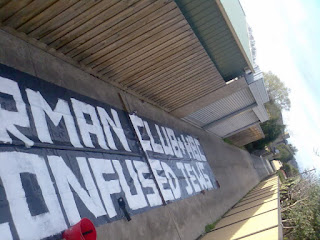 It read "GERMAN CLUB + HBC = CONFUSED JEWS", a reference to some Tottenham Hotspur supporting members of the HBC. The FFV Match Commissioner picked up on the banner and as a result the Zebras were fined by the FFV.

Both groups would eventually fizzle out. The HBC maintained a reasonable presence at Richmond games throughout 2008, the dramas caused by the outsiders who only turned up for a few key games looking for trouble spoiled what could have been a great thing for the club.

The Melbourne Victory Youth team was admitted to the NPLV1 in 2015. Their away game in Ballarat against the Red Devils was delayed for five minutes when their supporters invaded the pitch and made off with a corner flag. Whilst the perpetrators were punished, the club was spared the harsher penalties handed out to the FFV affiliated clubs in various leagues. Reports of further pitch invasions continue, including this one at Richmond earlier this year: 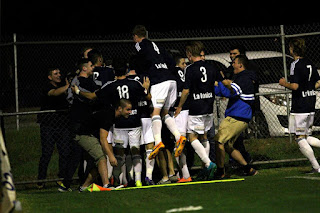 Once again the corner flag was taken, being raised and lowered up in the air as part of the celebration. And once again, the FFV reaction (likely none but unable to be determined due to the lack of transparency of their website) failed to do anything to stop the practice.

With Melbourne Victory Youth promoted to the NPLV in 2016, it was only a matter of who the fixture list would spit out first to see where the flashpoint would occur. It turned out that Victory would play South Melbourne a week before facing Melbourne Knights. This meant the Victory casuals/hooligans had their first chance to steal a former NSL powerhouse's supporter's banner at a competitive fixture to make heroes of themselves arrive at Lakeside Stadium.

Will it take a report on Channel Nine News to finally make the FFV act?
Posted by Mark Boric at 20:52 2 comments: 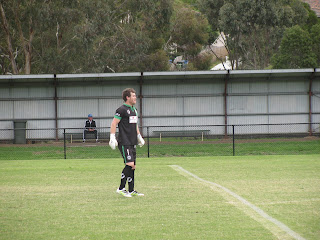 Doveton goalkeeper Stuart Webster, who's father Stan played for the club in the early 1980's, surveys the play further up the field. Webster was VPL Goalkeeper of the Year in 2003 (Frankston Pines) and 2012 (Dandenong Thunder). Keeping an eye on proceedings in the background is veteran goalkeeping coach Roy Lawton 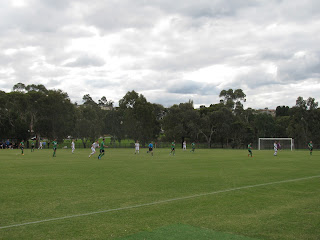 The leafy surrounds of Waratah Reserve, with a hill beyond the park at the North Western end. 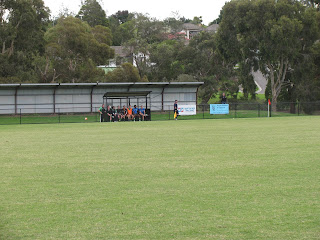 The Doveton bench, an impressive structure. Also ample and largely empty shelter down the Western side of the ground. 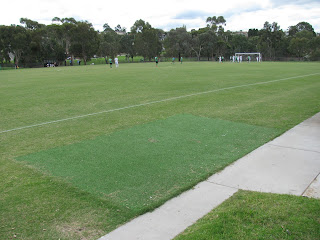 A rectangle of artificial turf means no unsightly bald patch at the entrance to the player's race. 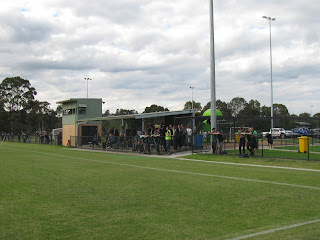 The Press Box and more populated sheltered viewing area on the Eastern side of the ground. 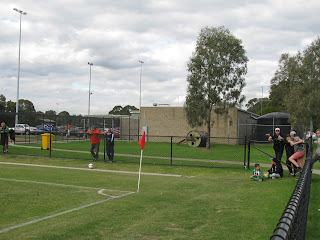 Also on the Eastern side is the car park, clubrooms and heavy roller. 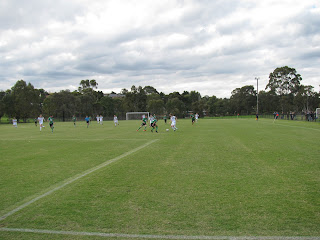 Another pitch in excellent condition, looking up the ground from South to North as Sean Seavill goes on the attack for Beaumaris.

David Gibson about to put the ball on the spot after Beaumaris were awarded a late first half penalty at 0-2 down.

Gibson beats Webster from the spot to get Beaumaris back into the game. 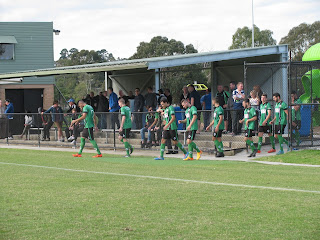 Doveton emerge for the second half, Roy Lawton catches up with Liam McCormick in the background.

Victorian State League and Victorian Premier League football was played at Waratah Reserve during Doveton's spells in the top flight during the 1980's and 1990's. On the other hand Beaumaris are currently at their highest ever level in competing in State Two South East.

Goals from Phoenix Lawton and Elliott David had Doveton 2-0 up before Beaumaris were awarded a contentious penalty before the break. Lawton's second goal seemed to have secured the win for the home side in the seventieth minute, but there was late drama as Beaumaris pulled a goal back in stoppage time. Holding on to their 3-2 lead saw the Doves keep their 100% winning record early in the new season. 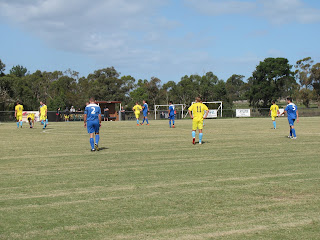 Glorious sunshine provided great conditions for football, and though a little yellow in appearance the surface at Lawton Reserve was in excellent shape. 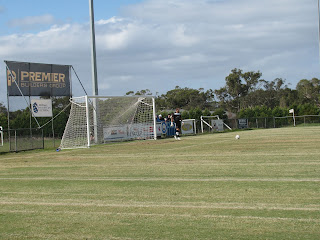 Langwarrin keeper Robert Acs about to take a goal kick. 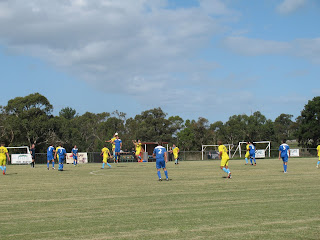 An aerial duel in the middle of the park. 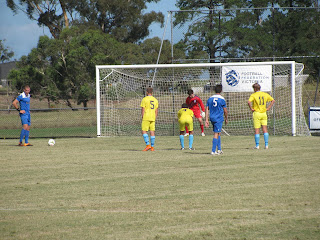 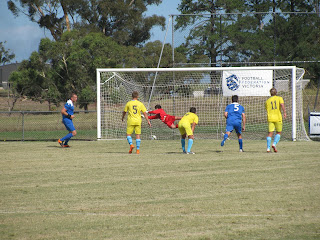 It's 1-0 as Nicholes' penalty hits the back of the net. 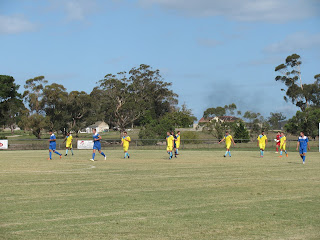 The players head back for the kick-off after the penalty conversion. Farmhouses in the background, and beyond that smoke from a controlled burn off on Arthur's Seat. 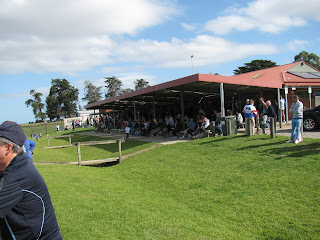 A good crowd was in attendance, mainly in front of the clubrooms. 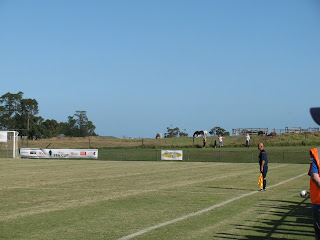 During the second half some horses wandered down from the top paddock, always a hit with the kids. 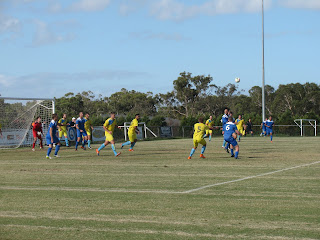 Andy McIntyre is about to head a corner to where Nicholes will flick it past the keeper to make it 6-2. 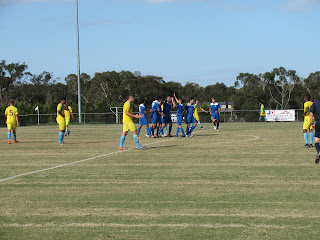 Plenty of celebrations for Langy on the day as they got their season off to a great start.

Langwarrin have probably been the most stable club on the Mornington Peninsula, as evidenced by coach Gus Macleod entering his seventeenth season at the helm. Since climbing the leagues at the turn of the century Langwarrin has generally competed in the top league in the South East leagues.

Frankston Pines have scaled greater heights however, including several spells in the state's top flight. 2003 saw them reach the VPL Grand Final, beaten 1-0 by Green Gully at Knights Stadium. With these highs have also come several relegations, falling back as far as the Provisional League in 2012.

The game got off to a scrappy start, neither side able to muster much good football in the opening fifteen minutes. Dangerous spearhead Caleb Nicholes, a multiple former League Top Goalscorer and League Best and Fairest Award winner, was brought down for a penalty which he converted to gain Langy the ascendancy. The goal settled the home side who started to string some passes together and were soon to 2-0 up, the lead the would take into the break.

Momentum was all with the men in their blue home kit, and a third goal came in the opening minute of the second half. Johnny Guthrie then made it 4-0, striking well from outside of the penalty area after a corner was cleared out from it.

It was a penalty which saw Pines open their scoring account for the season, and their revival continued with another goal pulling the score back to 4-2. Langwarrin would re-assert their superiority in the latter stages, three more goals including two from Nicholes to notch his hat-trick.

The wide margin saw Langwarrin head the table after the opening day, with the other Peninsula club Mornington sitting in second place after a 5-1 defeat of FC Clifton Hill.

Video footage can be found via the excellent Langwarrin Soccer Club website.